The little guy had his first bath tonight. Up until now we've given him sponge baths because his belly button had not yet healed. To save him the embarrassment of showing his bathing picture to any girlfriends when he is a teenager, we decided to get it out of the way and show any potential girlfriends (and the world) the picture here. I'm sure he appreciates that. 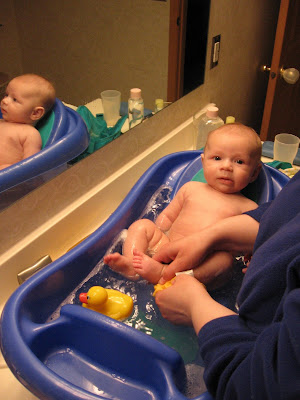 As for his belly button, what happened was that the outside healed faster than the inside, which poses a problem. He had to have two treatments of silver nitrate to take care of it. It looks much better and is now normal.